Frank Thomas and a Repost

.
In surfing the web this morning, I saw a note that today was Frank Thomas' birthday.

He would have been 98 years old.

He passed away after a rich and fruitful life at the all too young age of 91, but he still lives on in the hearts and memories of so many people.

He is, and will always be missed.

I've posted just a few pictures from our wedding, hopefully showing his great spirit and wonderful smile. The quality isn't great, but it's the memories that count, right?

This is us with
Frank
and his beautiful wife Jeanette.
Geez, was my hair ever this color?
Certainly not without a lot of help!
And look at Terry,
he makes my heart sing still. 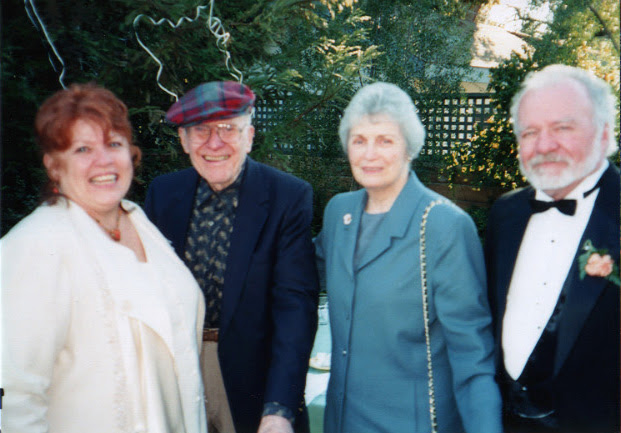 Again, us,
Frank
and Jeanette Thomas,
talking with
Stacia Martin 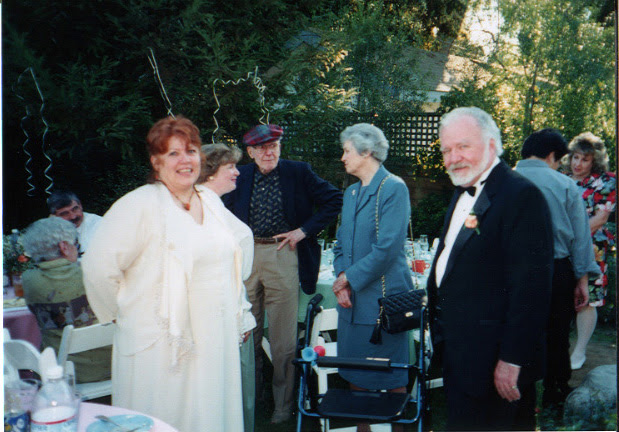 Here's (r-l)
Meredith Jones,
Frank Thomas,
Beverly,
the gracious lady, who for years
welcomed everyone to the Disney Gallery,
Russi Taylor
(voice of Minnie Mouse
and much loved wife of Wayne Allwine),
Wayne Allwine
(also gone too soon,
voice of Mickey Mouse
and beloved husband of Russi Taylor)
and
Sam McKim
(also passed, an incredibly talented man
and Disney legend.
Sam is certainly worthy
of his own blog entry,
I'll try to get to that soon). 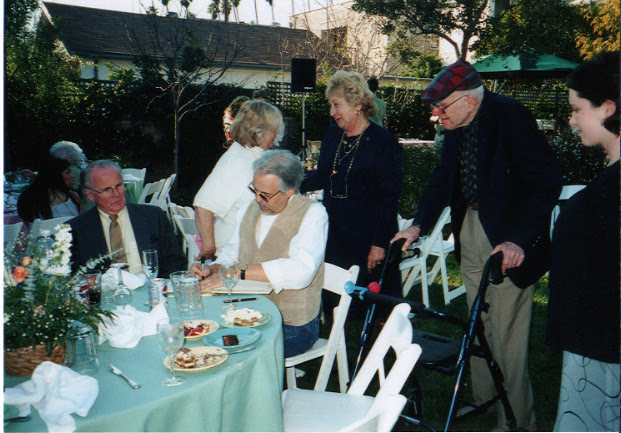 We miss you Frank.
We always will.

*****************
I also thought I'd repost a piece I did when Franks' good friend Ollie passed away, since their story is so entwined.
*****************
An era has now officially closed.
Once upon a time, we were deeply involved in the world of Disney. We collected, we attended conventions, we wrote a monthly newsletter for Disney collectors, I wrote articles for magazines and we made many, many good friends in the community.

Now a bit of history is in order here.

Back in the very early days, I'm talking the 1930s here, there were people who worked with Walt Disney who spent their time creating a legacy and fulfilling a vision. They worked hard and produced magic and made history in a field that, prior to their efforts had not existed. They flourished for years and left us with works of art that entertained and affected millions of people.

They changed the world.

Among these many talented people were a group known as Walt's Nine Old Men, a play on words that referred to FDRs Supreme Court.

They met in college and formed a lifelong friendship that is like a fairy tale. The worked together, met their wives around the same time, bought property and built homes next door to each other and maintained a close working relationship and a friendship that was a model for us all for some 70 years.

After retirement, they begin a whole new career, authoring books that became known as the official bibles of animation. Starting with Disney Animation, the Illusion of Life, they explained, in words and pictures how it all worked, written so that we can all see a bit deeper into the process that created so much magic for all of us.

Both Frank and Ollie were honored around the world for their unique place in the art world. They were also commemorated in a fine film called simply Frank and Ollie, directed and written by Frank's son Ted. If you are at all interested in this unique pair, I really suggest you get your hands on this film for a glimpse into their story.

But for me, they were much more than this.

We had the honor of meeting them in the late 1980s and became friends. They enriched our lives in so many ways and I always felt special when I got the chance to spend any time with them. These two men, along with their lovely wives were models of how we all would like to be. Talented, funny, creative, kind, warm and wonderful, they were different than most of the people we met. Not only were they supremely talented but, to a fault, these were Ladies and Gentlemen whose likes we aren't going to see again.

And why am I writing this now? Well, my heart was really sad when Frank passed away in December of 2004, and just today I learned that Ollie Johnston, the very last of Walt's Nine Old Men, left us today.

And the world is a poorer place for it.

And now they are both gone from us.

And tonight I am really sad.

I feel so sad when I read this,
but at the same time so incredibly lucky
to have had the chance
to have these people in my life. 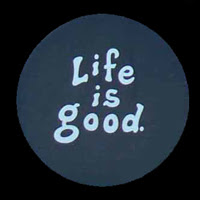 Lovely memories of a lovely day, just look at the smile on your face.

It was a lovely day. Now that I think of it, is Merediths last name even Jones? OOPS! Looks like the memory is gone.

They were truly Gentlemen.
I thank you so much for introducing us to them and having lunch together. It was one of my most memorible times.
It was so much fun seeing your wedding pictures again. So sorry still that we had to miss the wonderful occasion.