While we were camping at Leasburg Dam outside of Las Cruces, we were right next to historic Fort Selden.

At Fort Selden, there's a great Ranger that demonstrates authentic outdoor cooking. His name is Dave and he's just a hoot.

In addition to his many demonstrations, Dave also offers classes in Cast Iron Campfire Cooking. You have to come up with at least six participants and make an appointment then you're good to go!

So could I pass this up? Absolutely not!

So I put together a group of friends, including my wonderful new friends from Las Cruces, who we met while we were at Bosque del Apache last winter. Thne I went to talk to Dave to discuss the menu. With this program, you have a choice of soups (we chose split pea), a bread (beer batter), an appetizer (chicken stuffed sopaipillas), a main dish (spareribs with sweet potatoes and corn) and a dessert (cherry cobbler) plus campfire coffee.

All this for just $15.00 per person, what a deal! And if you get more participants, the price goes down!

Just a note here, there are LOTS of photos in this entry, so they may take a while to load. As always, you can click on any photo for a larger version.

So our morning arrived and around 10:00 (our choice) we moseyed on over to the Fort where we got our first look t our kitchen. 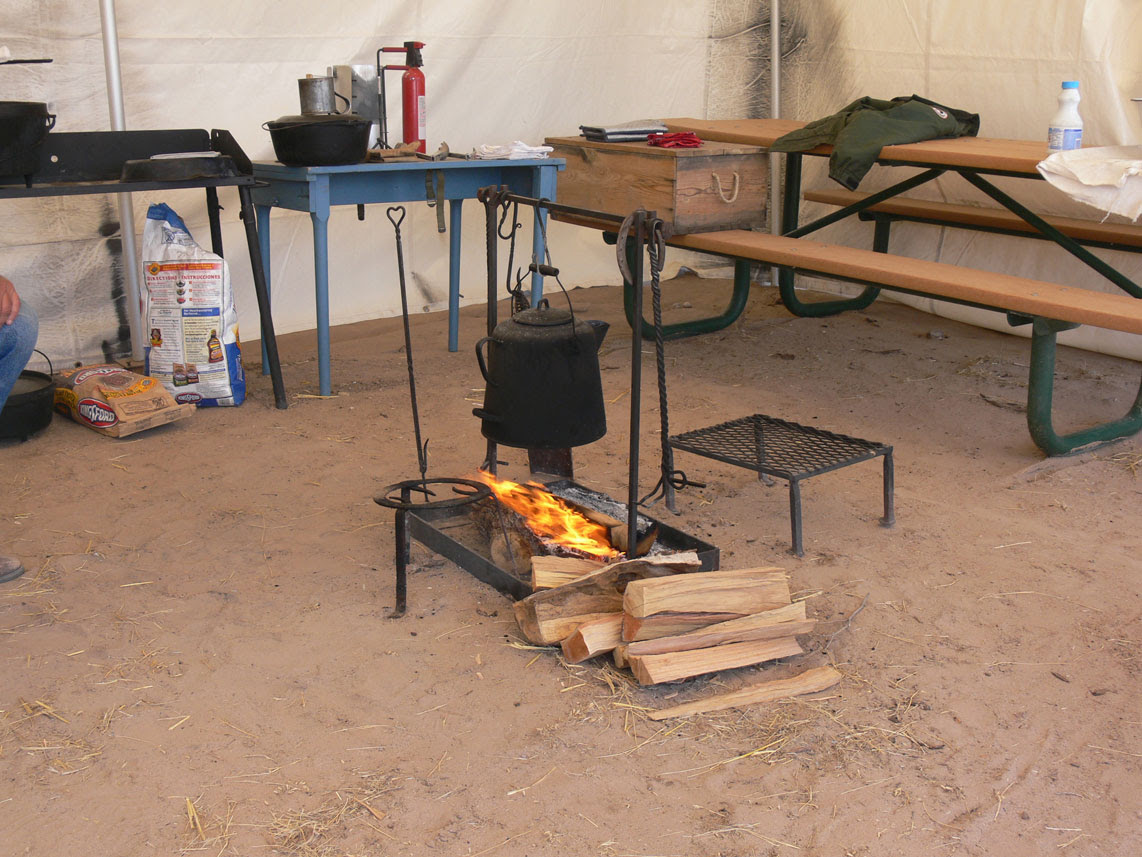 Dave had the coffee going, as well as a nice fire. We would use a combination of hard wood and briquettes during our session.

We started out by generously applying a rub to the ribs, then browning them on the fire. 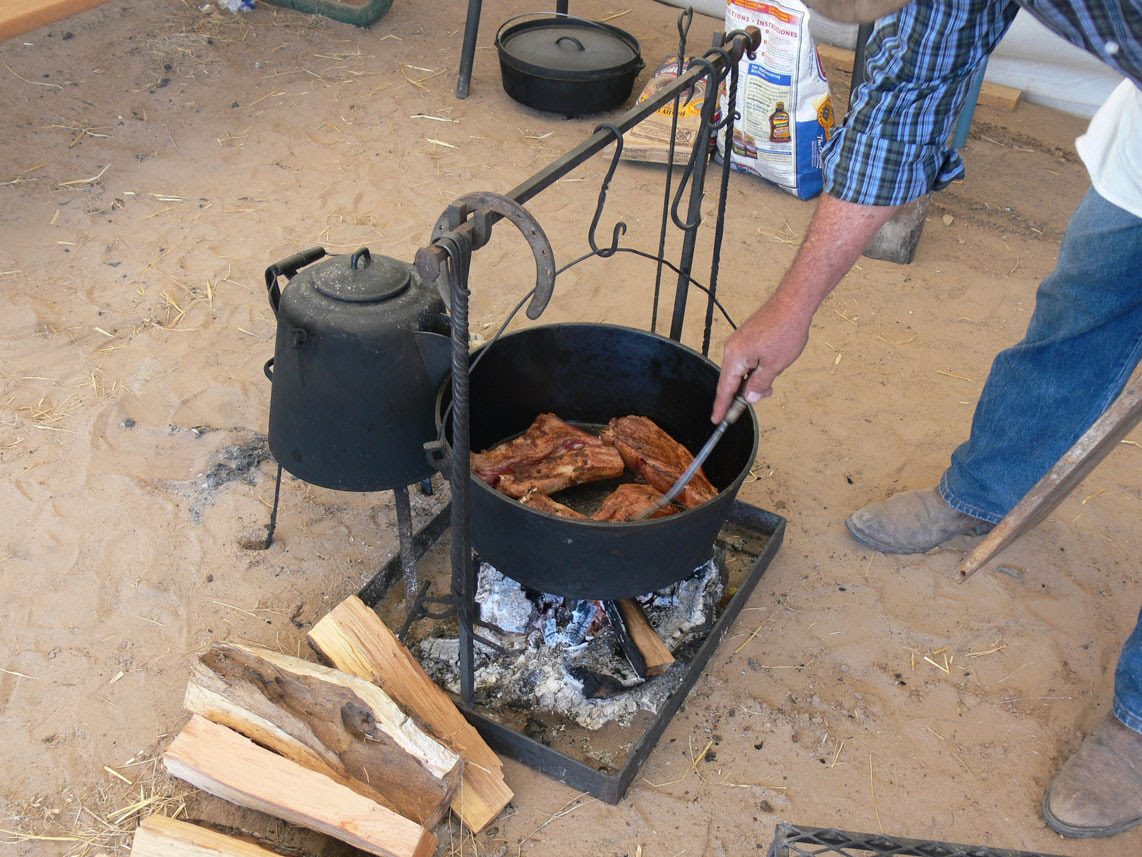 After browning off the meat, we caramelized some sweet potatoes. These would be the base on which we would finish off the ribs. 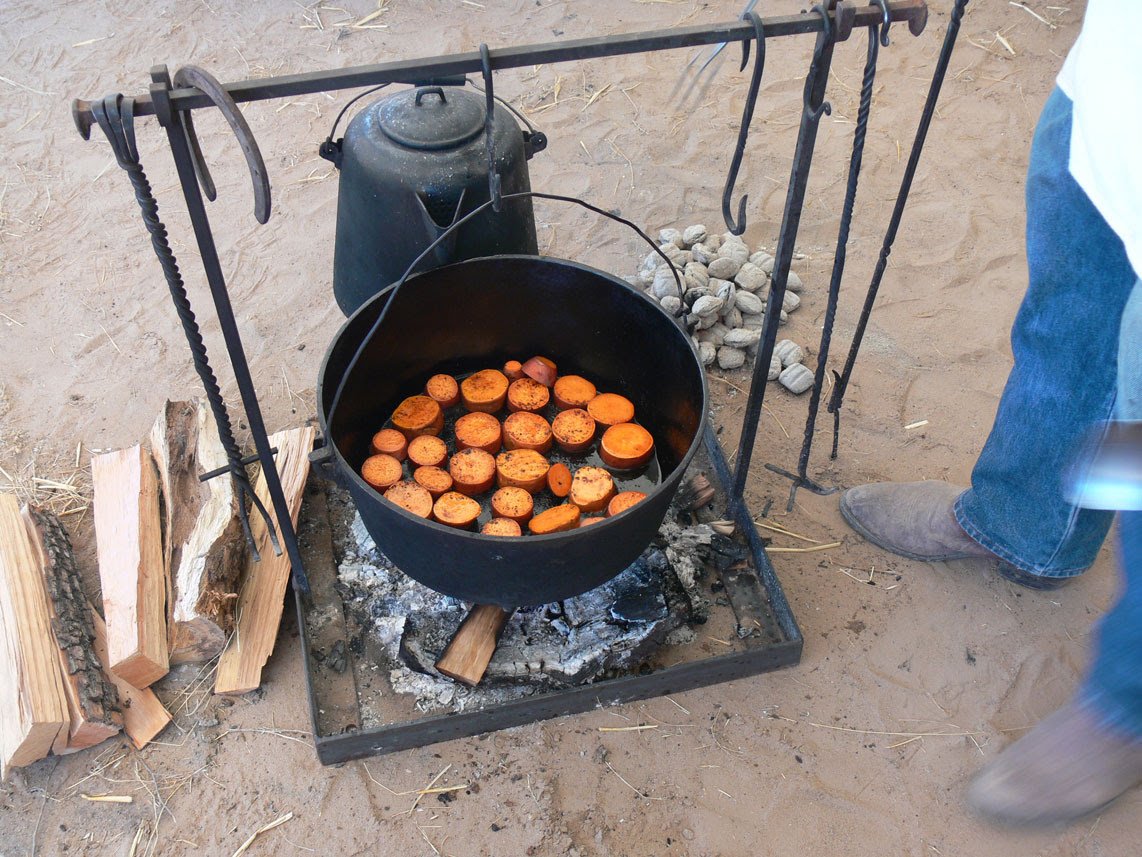 To prevent burning during the long cooking session, we removed the sweet potatoes and placed corn husks (which we had soaked in water for a few minutes) in the bottom of the pan. These would provide a good cooking bed for the rest of the pot.

Then we added the sweet potatoes and the ribs and over the coals the pot went. 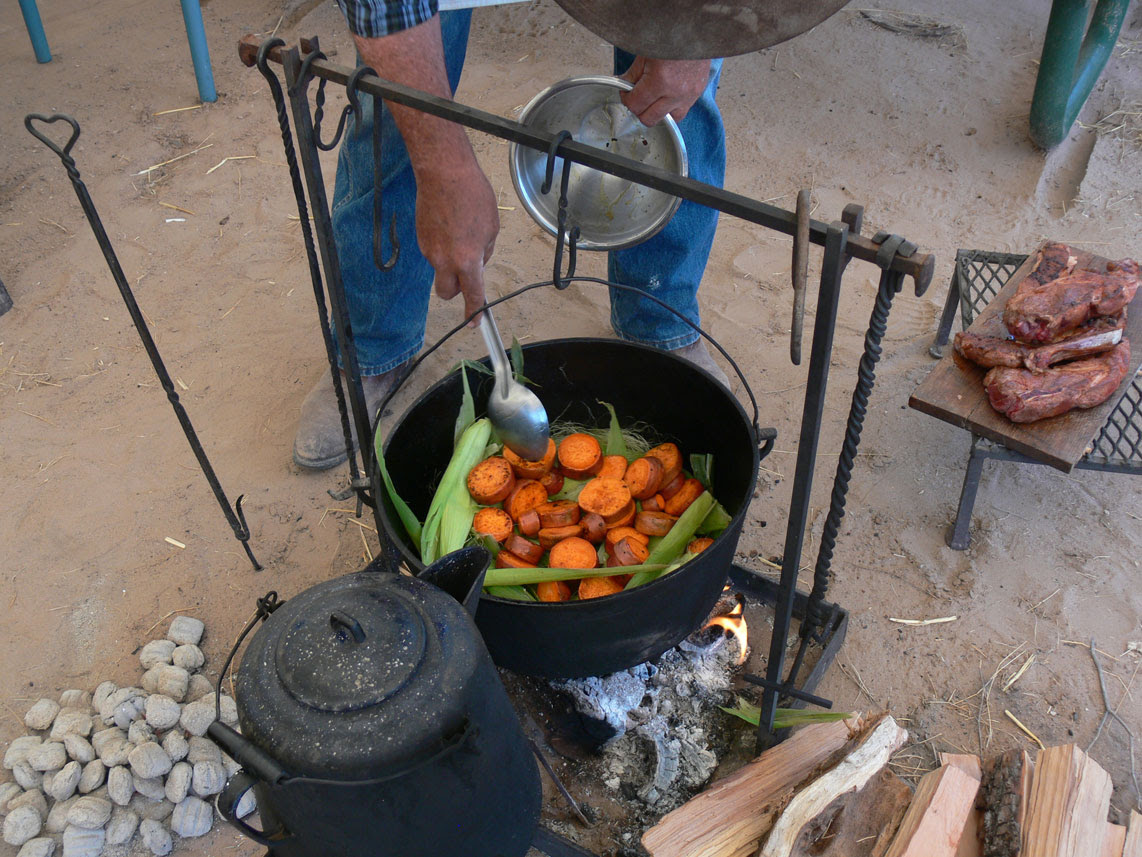 In addition to all the other wonderful food, we were treated to fresh churned butter, which had been churned the day before during another food demonstration. YUM! 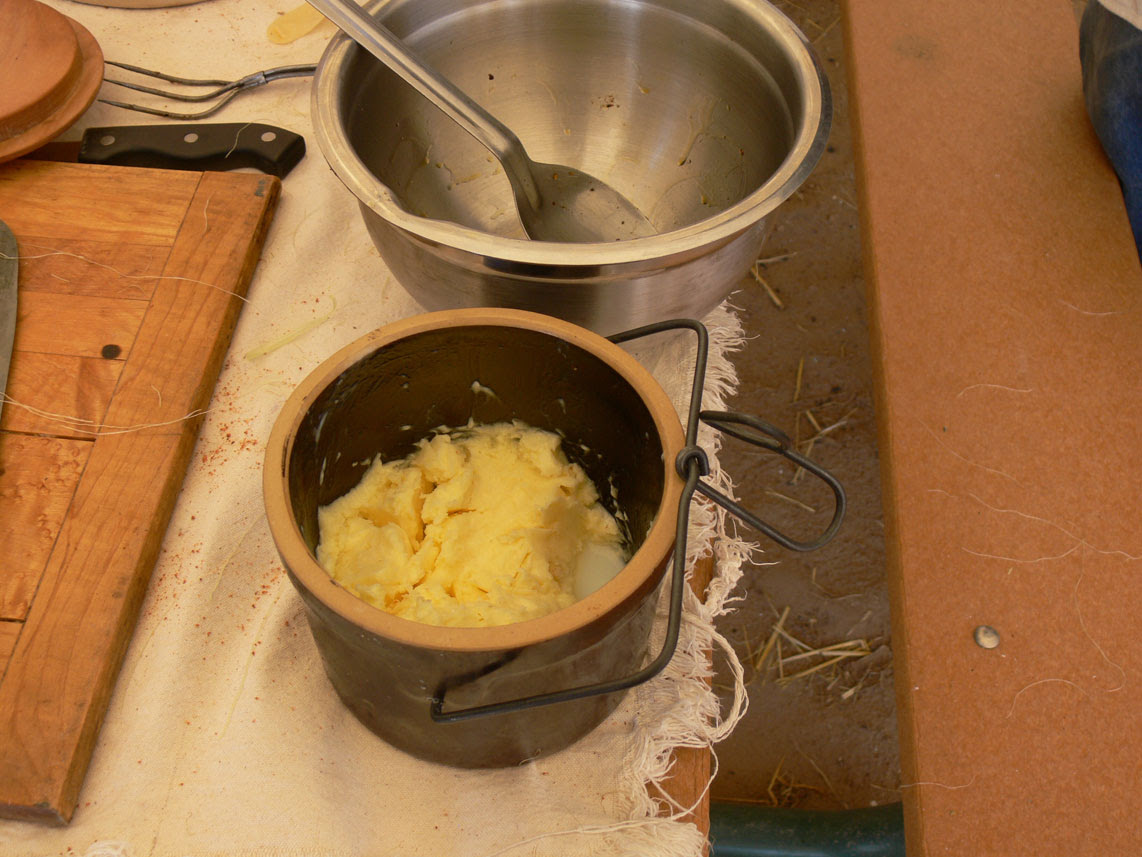 After the main pot was up to heat, Ranger Dave put a rack on the veggies and in goes the meat. Then it's all covered up with a tight fitting lid. 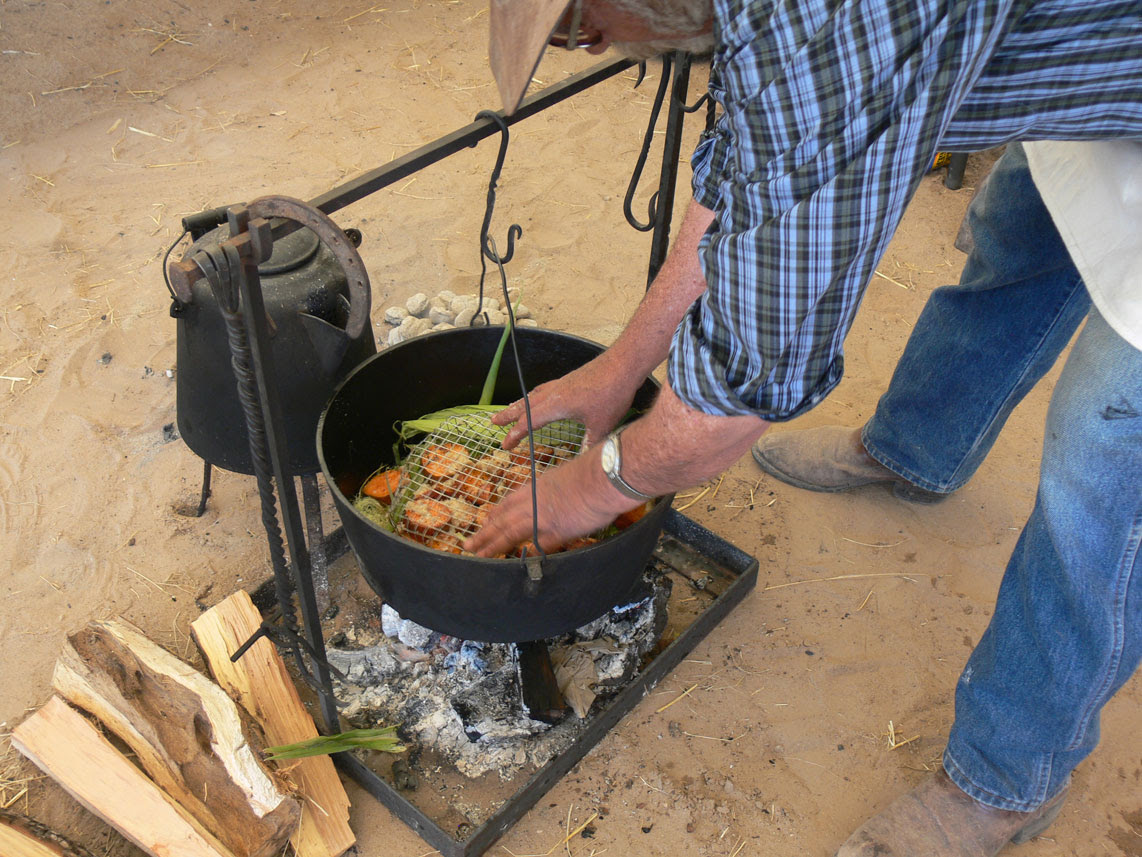 Dave has a metal work table off to the side, just to make things a bit easier (bending over all day can be a bit of a chore, although I'm not sure if the pioneers had this luxury). We then moved hot coals on to the table so we could set the pot on top of them to roast. This is the reason old time cast iron pots have legs, so you can either put them right into the fire or over coals. 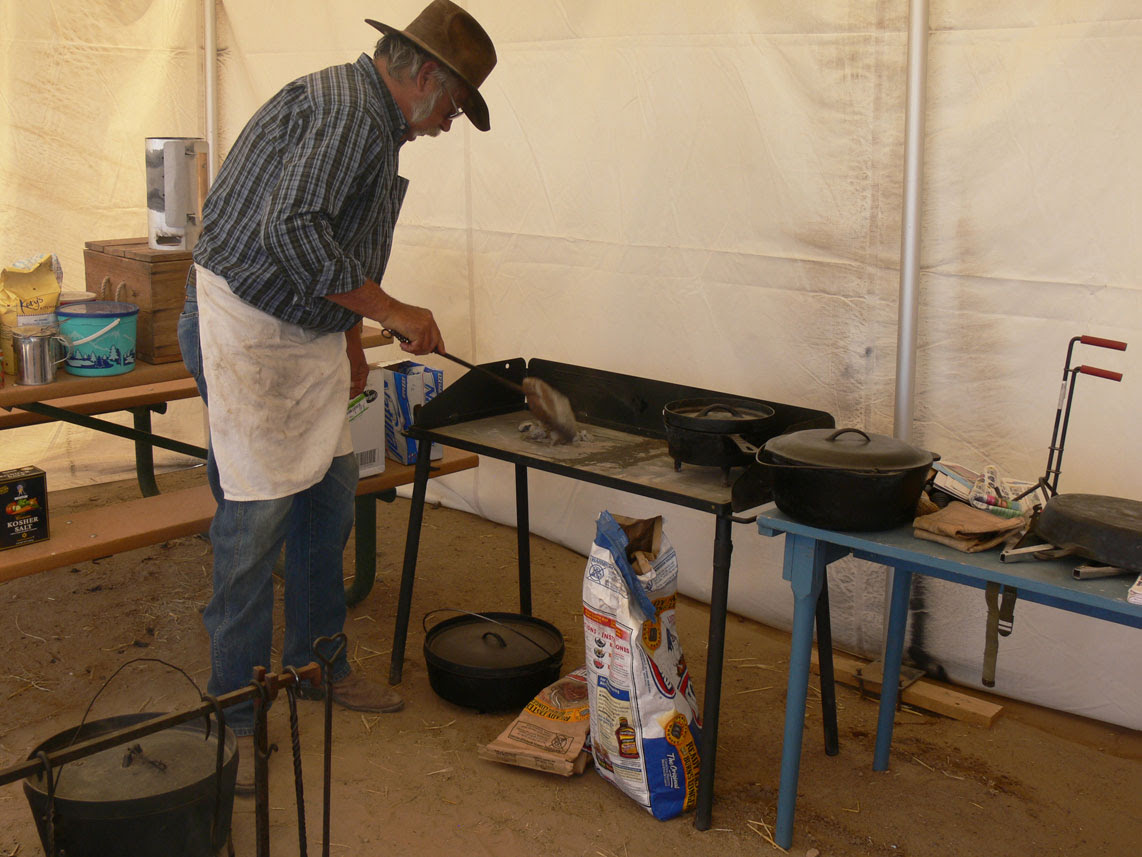 So the pot goes over the coals, then we put more coals on top of the lid (which has a high lip just for this purpose). With the coals on top AND on bottom, we have a perfect oven.

Next we started the sopaipillas. We all helped make the dough and here's Norton assembling the pies. 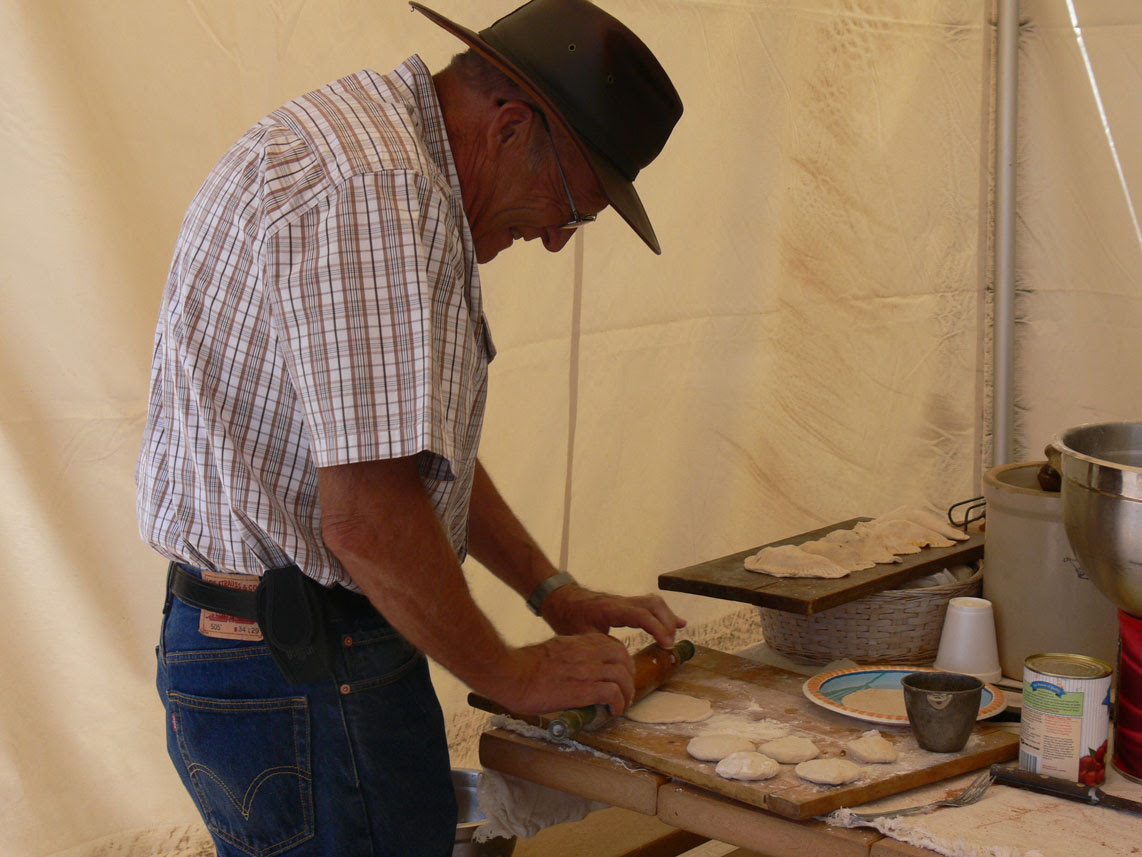 Aren't they luscious looking? Filled with chicken and veggies they're ready to to be fried up (in lard, just like those old timers!). 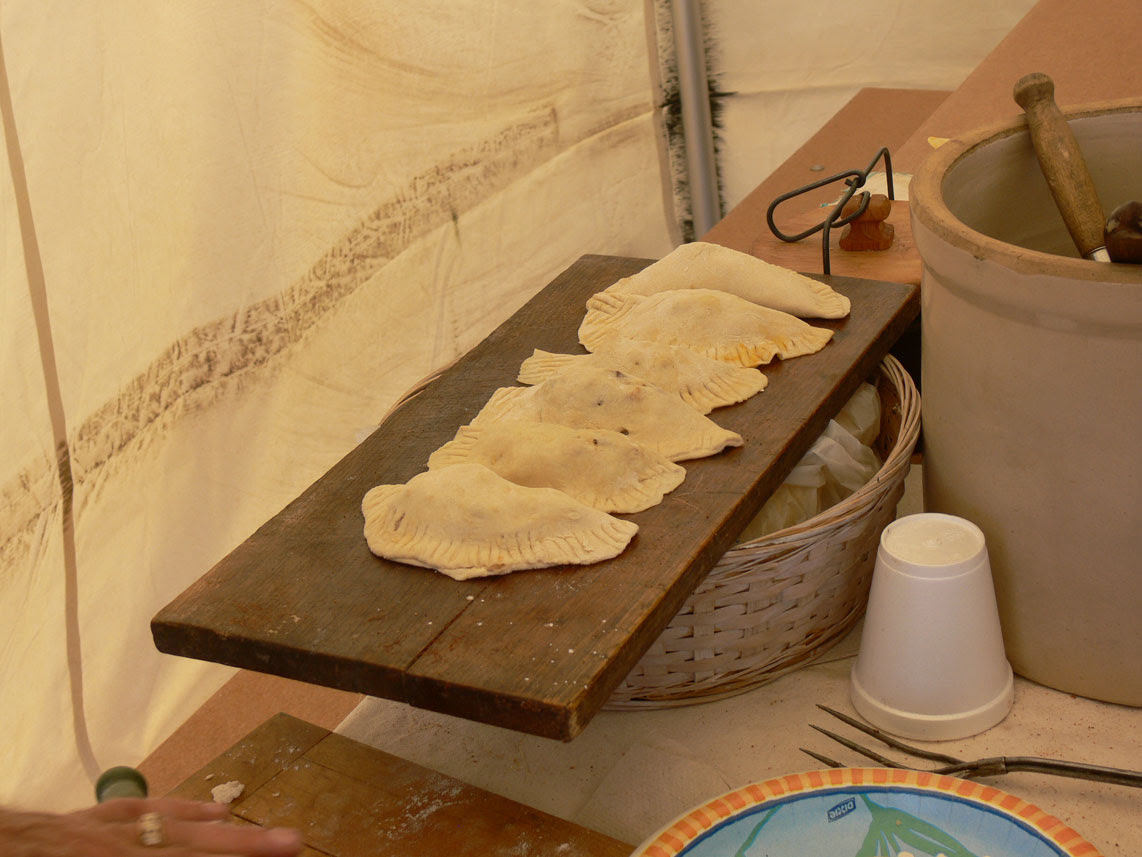 In they go! The oil is so hot they immediately begin to sizzle and cook in just a matter of minutes. 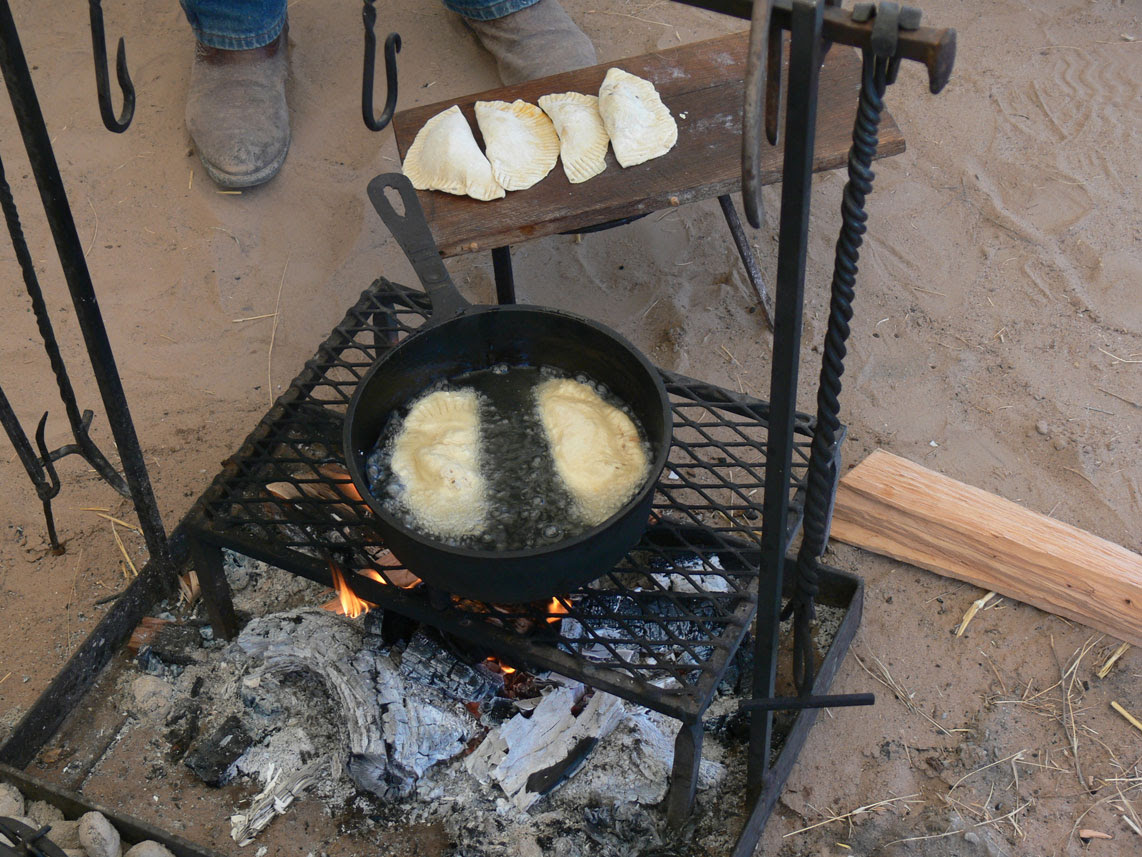 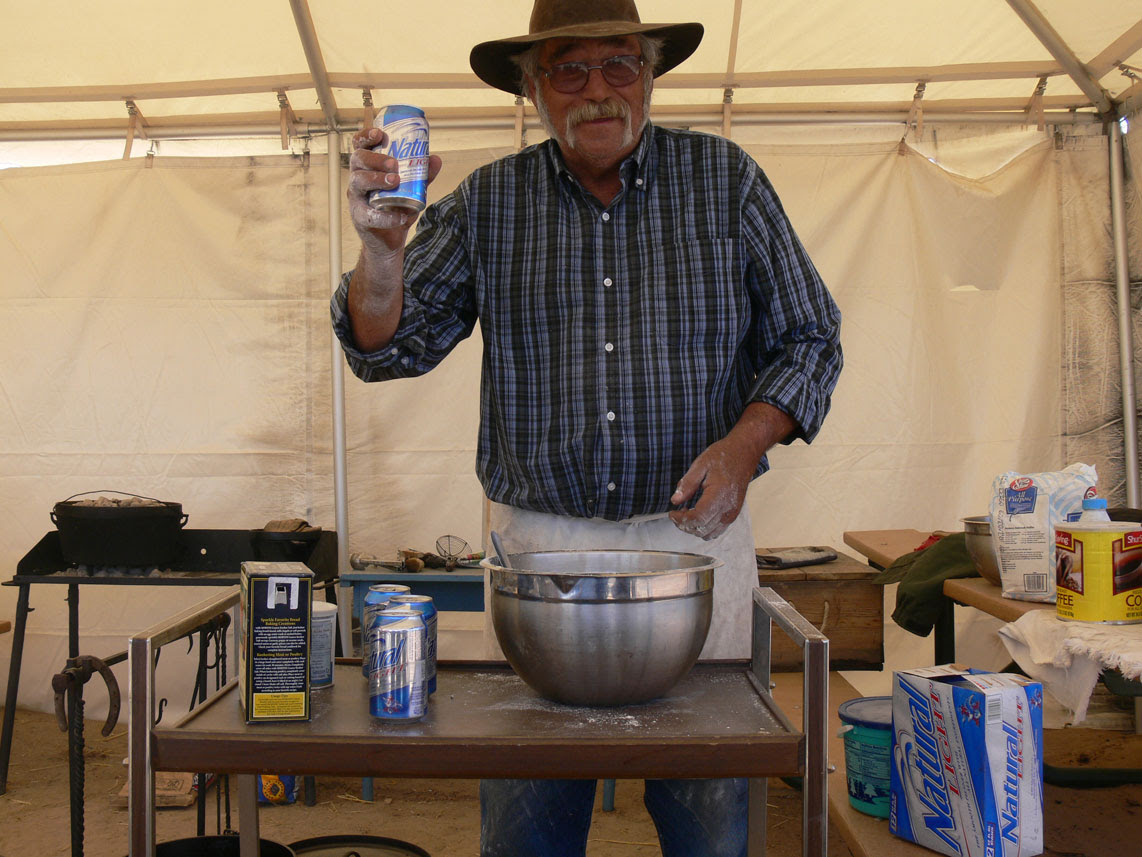 He's been making bread so long, he never needs to measure, just eyeballs the whole thing. Wow, he's just like those cooks on the Food Channel! 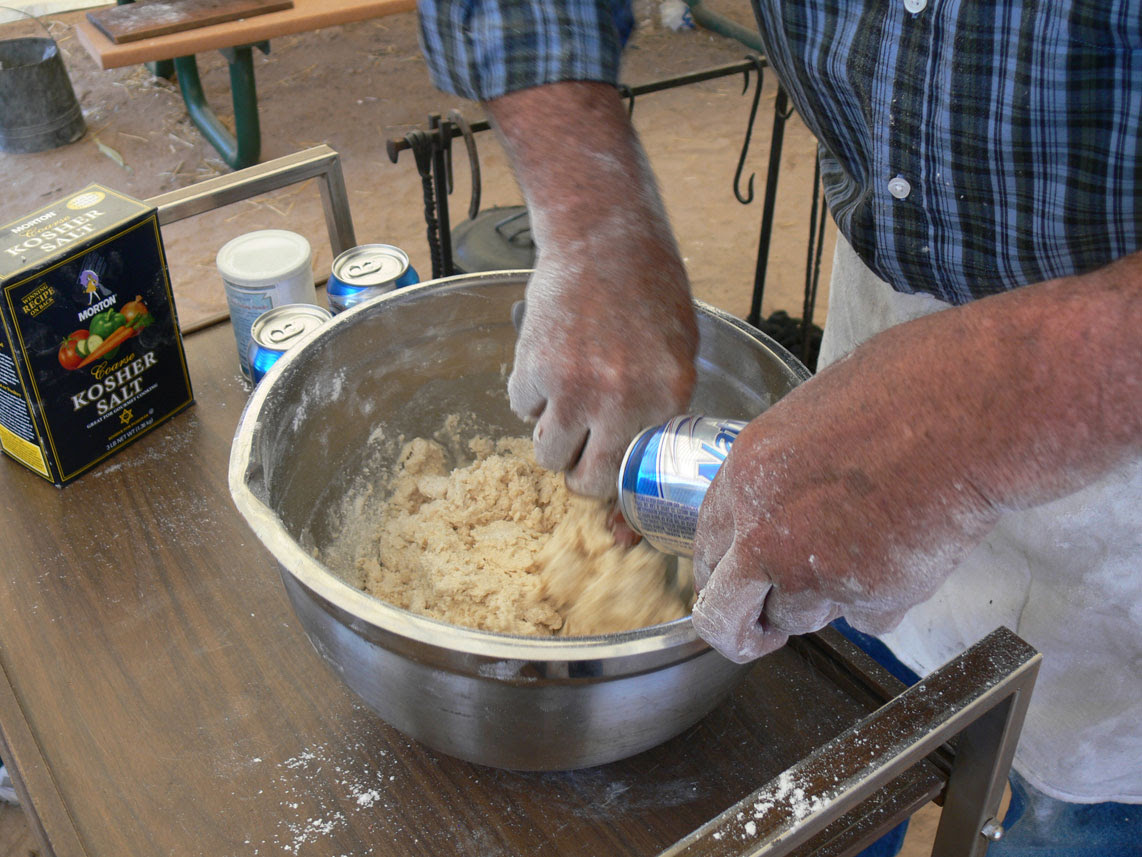 OOPS, I forgot to mention the split pea soup. We made this with salt pork, onions, celery, dried split peas and water. Very tasty and quite pretty. 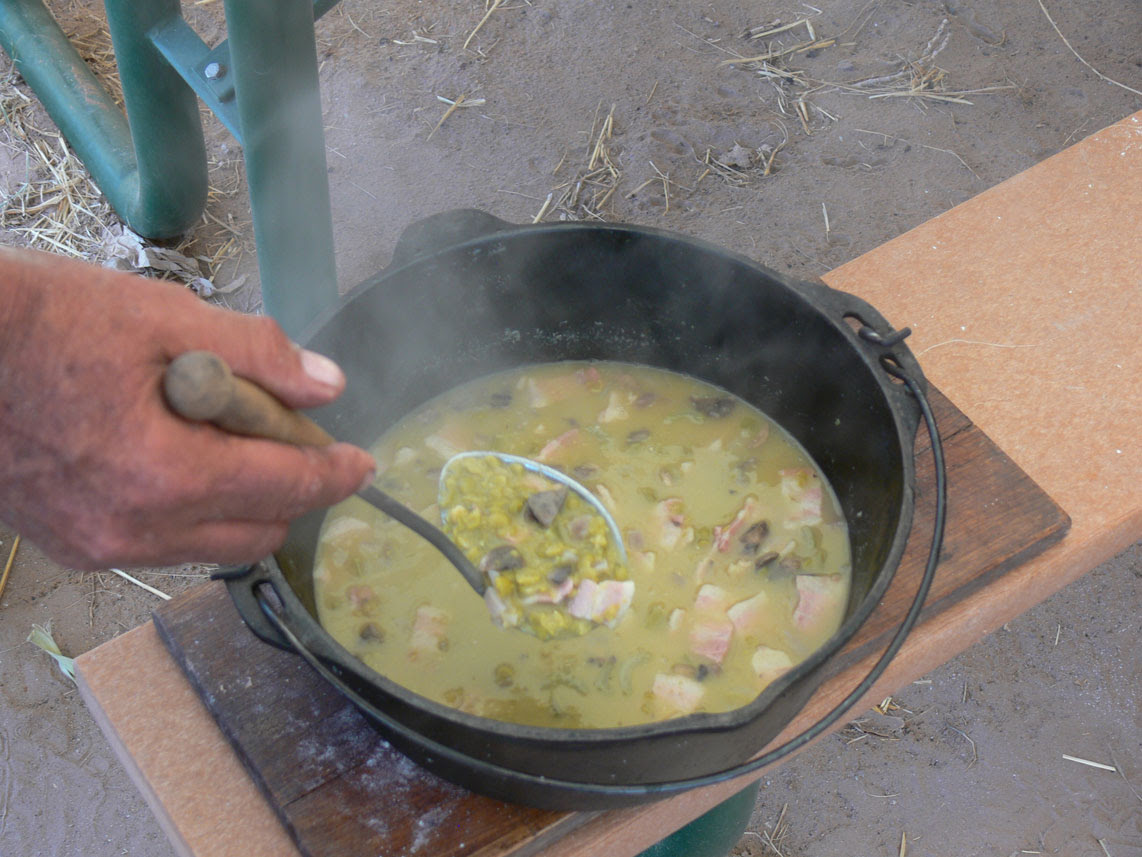 Now it was time to add fresh corn on the cob and whole jalapenos to the ribs, which by now were smelling so good we could hardly control ourselves. 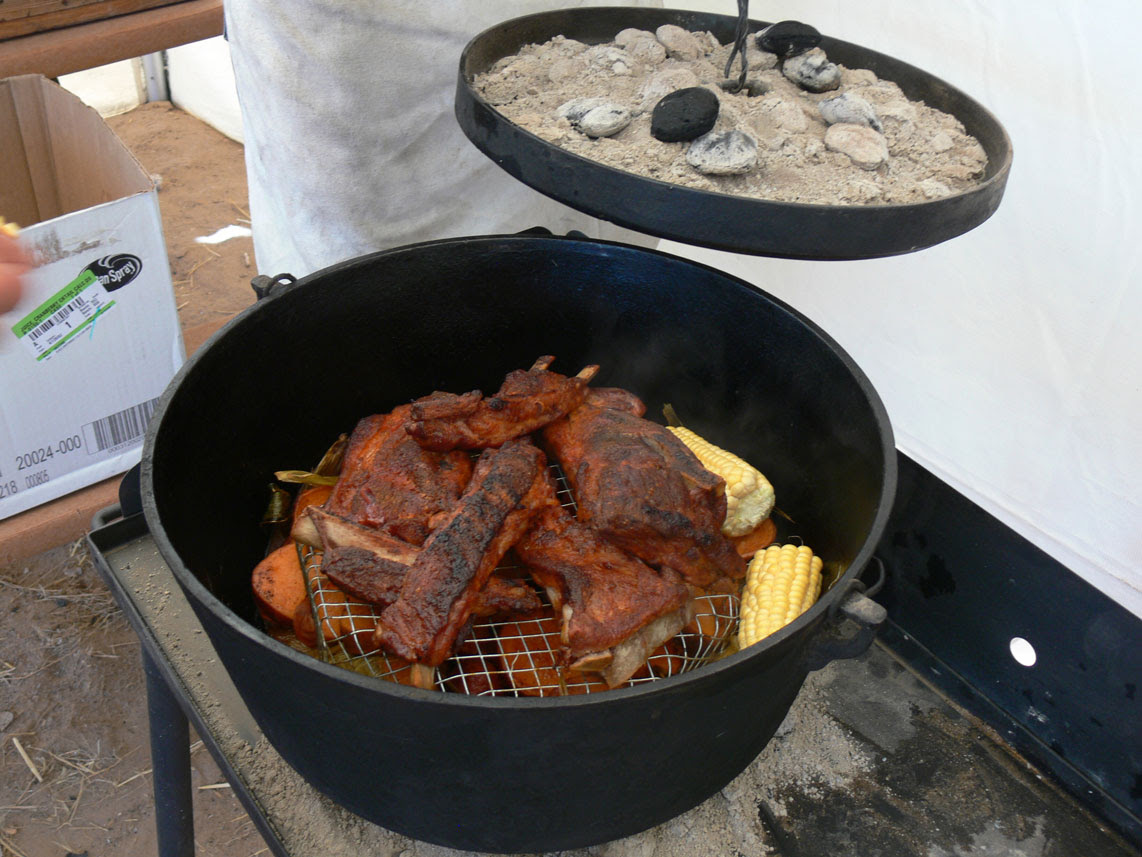 By now, everything is really coming together and it's time to start dessert. Here's Jan pouring in the cherry pie filling for the cobbler. 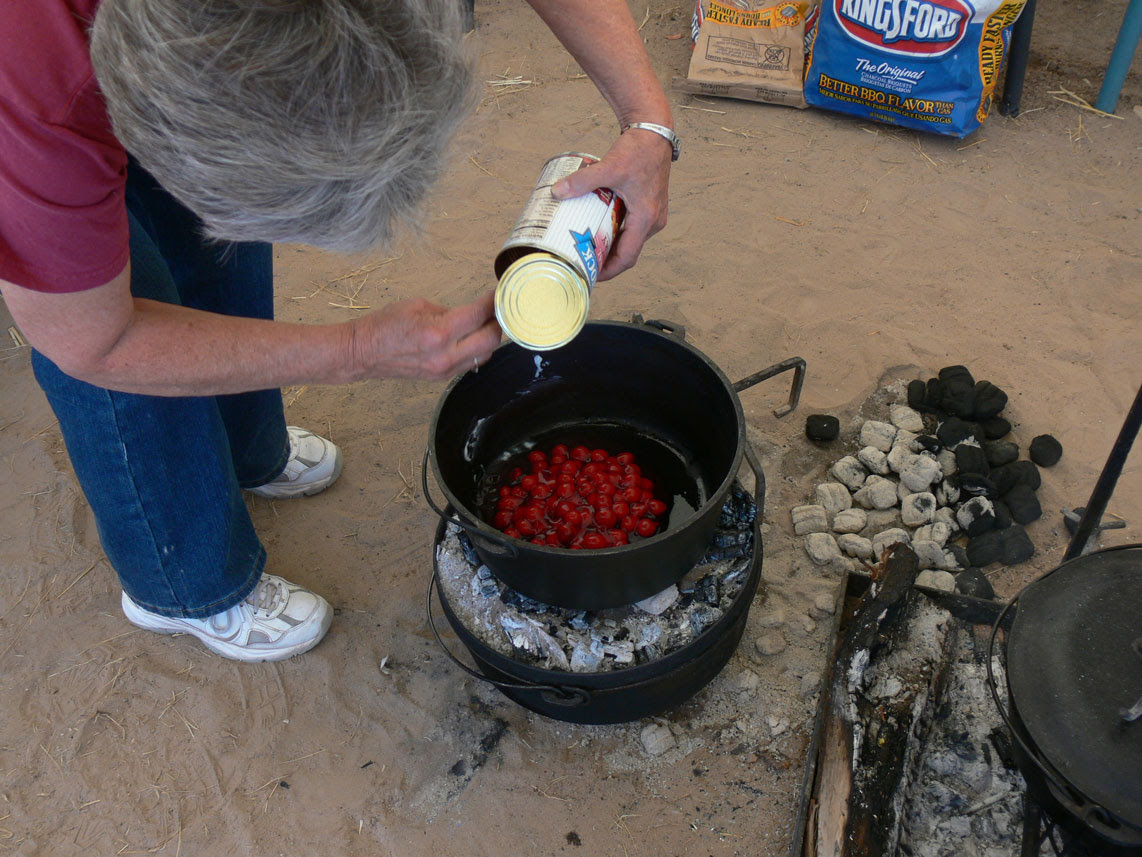 The topping is quite loose and piled on top of the cherries. Now it's ready to cook. 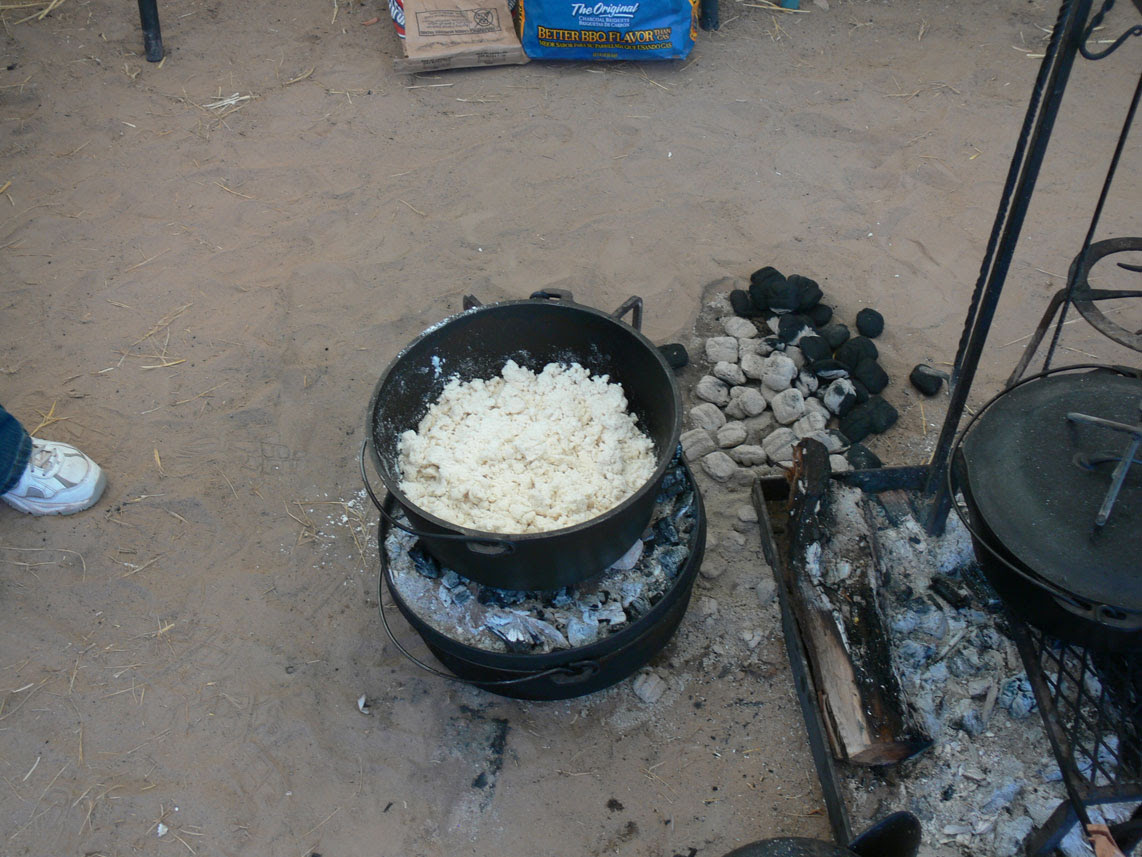 Here's our pots, stacked up to take advantage of the coals and heat.

Sort of an early version of the double oven. 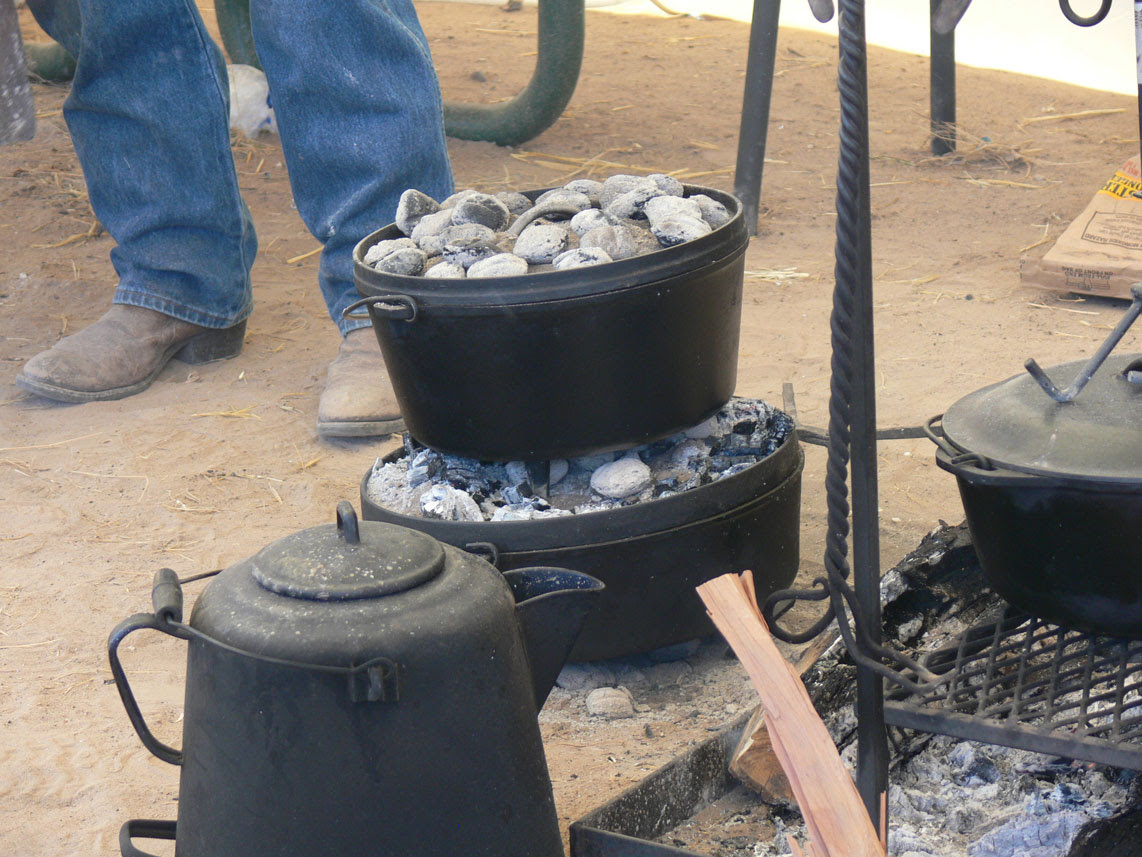 Here's our Beer Bread, just out of the "oven". With the fresh churned butter, this was so delicious. 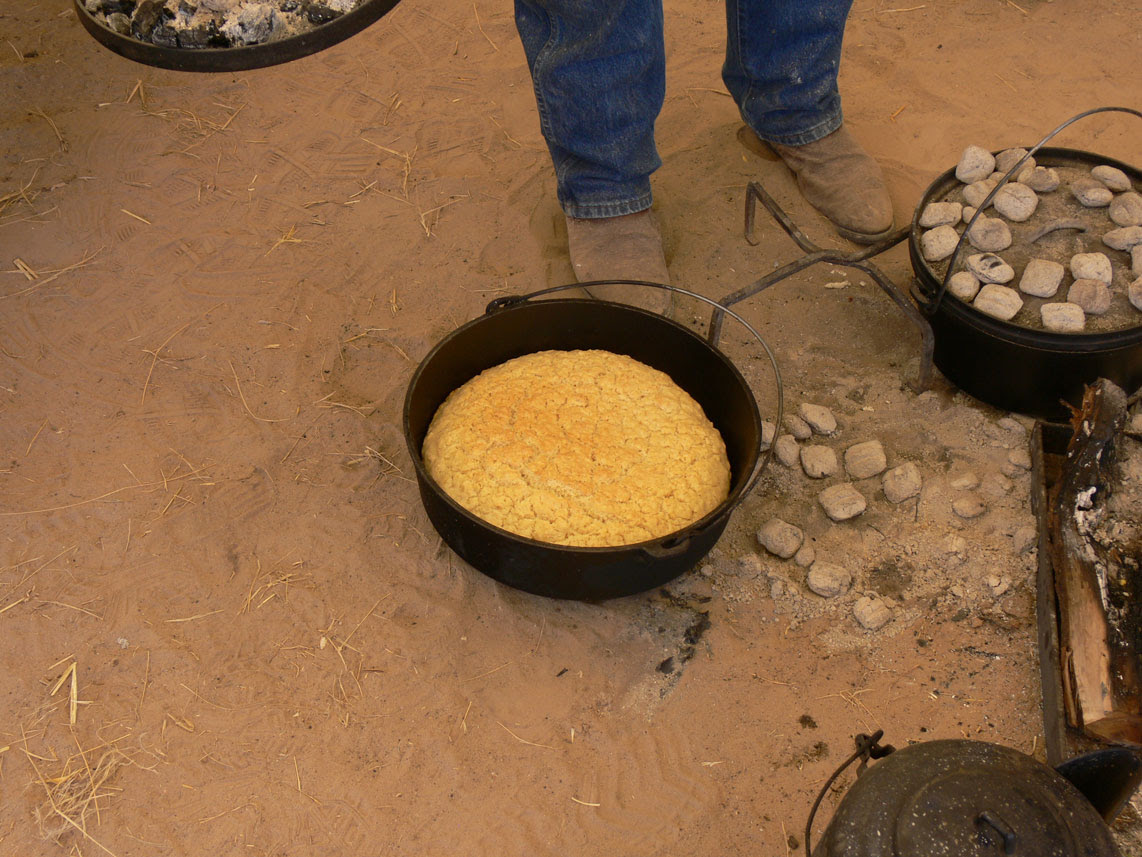 When the ribs were done, this is what greeted our eager eyes as we removed the lid. The colors and aroma were just astounding. 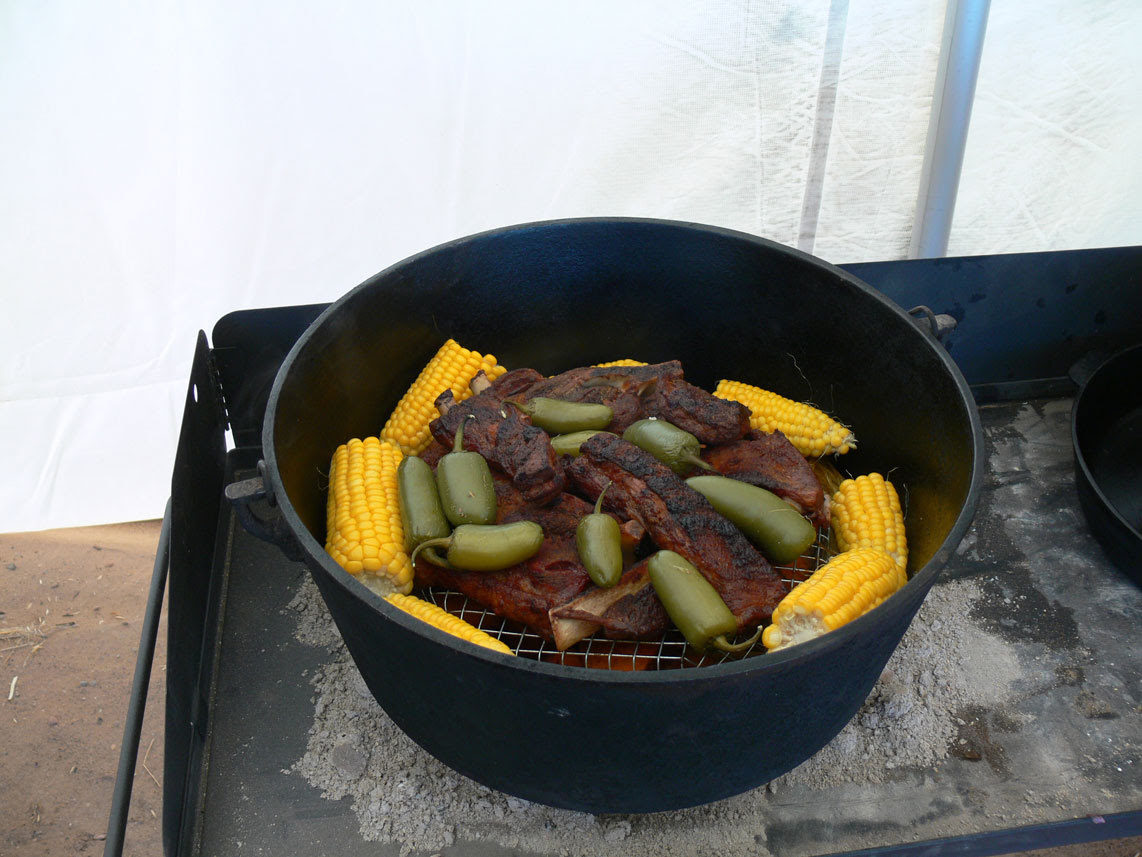 And this meat was just as tender and juicy as could be, absolute perfection 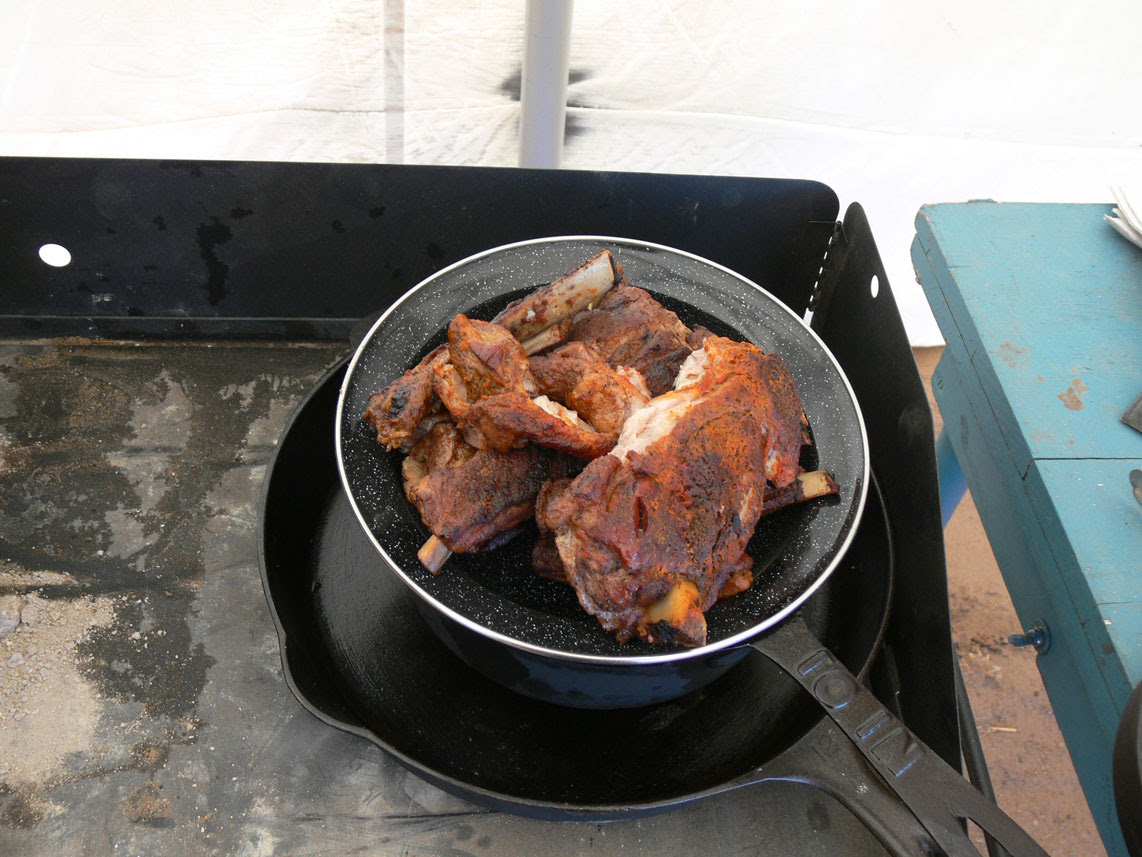 This was such a wonderful adventure, I would definitely recommend this for anyone who's in the area of Las Cruces.

To top the day off, we all got a booklet about cast iron cooking along with the recipes we made that day. AND we each got a $10.00 gift certificate to Sportsman's Warehouse, making our meal and class a paltry $5.00. What a deal!

Do we know how to have fun or what?